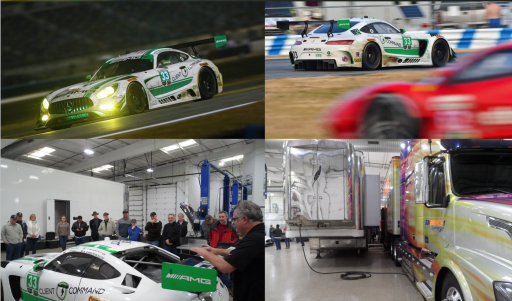 The Triangle Section started its year of events with a fantastic full day of tours on Saturday, January 13. First, our group toured the Riley Technologies motorsports facility in Mooresville, N.C.  Bill Riley gave a history of the company that has supported many winning teams and races, including the 24 Hours of LeMans. The company was formed in 2004 by Bill and his dad, Bob, who was a motorsports legend in his own right. The team was preparing for the Rolex 24 Hours at Daytona January 25 to 28 in the GT Daytona class. Twenty-four members were on hand to view all the intricacies it takes to put the AMG GT3 on the track and keep it running flat out for twenty-four hours. Riley is responsible for the upkeep of two cars, the #33 Riley car and the #75 Sun Energy car; the third AMG GT3 racing in this class is the #71 car fielded by P1 Motorsports. Bill said that the total cost per car for the racing season was $2.5 million (car, gas, tires, team support, drivers salaries, transportation, etc., etc.) – the car itself is about $500,000.At the end of the Rolex 24 on the 28th, all three AMGs were running with the following places at the finish: #33, 4th; #75, 8th; #71, 12th.

Autoweek Magazine report on the race was as follows: “In GT Daytona, the best race on the track ended with about 10 minutes left, when the second-place car, the No. 33 Mercedes AMG Team Riley Motorsports GT3 had to pit for a splash of fuel. It was running less than a second behind the leader, and eventual winner, the No. 11 GRT Grasser Lamborghini Huracan GT3 of Mirko Bortolotti, Franck Perera, Rolf Ineichen and Rik Breukers, took the brand’s first 24-hour class victory. Second, a full lap behind was the No. 86 Acura NSX GT3, followed by the No. 48 Lamborghini, then the No. 33 Mercedes.”After filling our minds with information it was time to fill our bellies at Sonny’s BBQ in Concord, always a good idea.  After a delicious lunch and great fellowship by the 22 folks in attendance, we moved six minutes down the road to the Hendrick Heritage Center to get a tour of Rick Hendrick’s personal auto collection (and guitar collection) and memories of his growing up in Palmer Springs, Virginia, in the form of businesses and other memorable locations. The collection includes an example of every Corvette produced, lots of Camaros, and other great autos, including a 2009 AMG SL65 Black Series in the back corner. Upstairs is Rick’s “Man Cave,” housing his guitar collection and other great stuff, including a 1/8th scale Ferrari La Ferrari, which is reportedly worth over $11,000!Although we weren’t allowed to take pictures at the Heritage Center, one of our tour guides suggested the following YouTube video of Joe Bonamassa playing one of Rick’s guitars in the “Man Cave” and video showing a portion of the collection in the Center.  You can find it at:

A couple of Internet links to other views of the car and musical memorabilia collection as as follows: