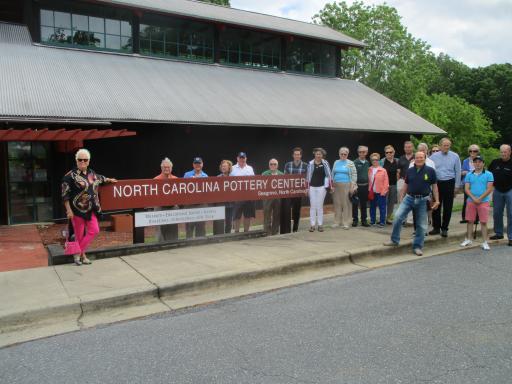 Several MBCA events were arranged around the May 6, 2017 Pinehurst Concours d’Elegance.  One of them was a tour was organized by Tom Reedy of the Triangle Section to drive from Pinehurst to Seagrove, NC to visit a few of the many pottery makes in the area.  It was about a 45 minute drive for 15 cars and about 25 participants.  The first stop was the North Carolina Pottery Center.  A curator gave us a talk on the 200 year history of Seagrove as a center for the manufacture of both utilitarian and decorative pottery.  This area became a center for pottery manufacture because of accessible deposits of several types of clay.  The Pottery Center has a collection of the many different ware designs that have been produced over time.

The next stop was at the Frank Neef Gallery. It has been in the area for about 20 years.  His specialties are both crystal glazes and cutting elaborate patterns in the clay bodies before firing.  The latter requires particular skill in both cutting the wet clay and making patters that will not change as the object is fired.

The third stop was at the Johnston and Gentithes Pottery and Sculpture gallery.  Fred Johnston does work with clay that starts on a wheel and has decorations that often reflect southwest Indian traditions.  His wife makes elaborate clay sculptures, many of which are quite whimsical.

The final stop was at the Ben Owen Galley.  The Owen family has an extensive history of pottery making going back to at least 1830.  The Ben Owen Gallery is in its third generation of operation.  Asian ceramics were a strong influence on Ben Owen, Sr. as he worked at the Jugtown Pottery in Seagrove from 1923 to 1959.  He established his own pottery in 1972 and developed both glazes and shapes based on his extensive travels.  Ben Owen III started working in the pottery when he was 9 years old in 1977 and continues to this day.  His work is in numerous collections and museums around the world but he still produces several thousand pieces every year as well as teaching and demonstrating technique visitors to the pottery.