Mercedes-Benz at the 2017 Pinehurst Concours d’Elegance 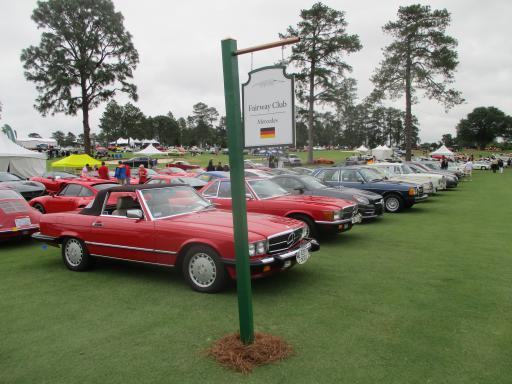 In its 5th year, the Concours held on the fairways of the historic Pinehurst Resort gathers some of the country’s finest historic vehicles the first weekend in May.  This year 122 vehicles were invited to the Concours to match the number of years from the resort’s founding.  In addition, cars from local clubs participated in the Fairway Club.  This is an area just adjacent to the Concours field and contained over 250 Porsches, Jaguars, Ferraris and of course, Mercedes-Benz.

There were 40 Mercedes in the Fairway Club with owners from 19 different Sections.  Seven national officers , board members and regional directors attended including president, Terry Kiwala.  A tent was set up with volunteers to talk about the MBCA and answer questions in general.  There were 21 new members signed up that day and 23 membership renewals.

Heavy rain had gone through the area the night before and there were intermittent showers in the morning.  The tough grass and good drainage on the Pinehurst fairways, however, presented no difficulties in getting our cars placed on the field.  By 10:00 the sun came out and it was a great day all the way through the concert by Sara Evans in the late afternoon.

Adding considerable variety to the Concours was a group of a dozen racing cars from the 1940’s to the 1970’s.  In addition Rick Hendrick brought 3 of his new supercars to the event, unfortunately they were a Ferrari, Porsche and McLaren.